Who Do You Think You Are?

Australia has an unpleasant history when it comes to national identity, and trying to impose one. A white one.

Like in 1901, when descendants of the ‘founders’ who claimed Australia as their own — despite it already being inhabited by Aboriginal and Torres Strait Islander people, the oldest continuous cultures in human history — introduced the Immigration Restriction Act. It became known as the ‘White Australia Policy’ and sought to prevent non-European, non-white people migrating to the country. Similar schemes had been in place in some of the individually-governed colonies prior to federation, too.

But there were some exceptions to the White Australia Policy. Like the cameleers recruited from Afghanistan, India and Egypt, who were instrumental in helping Australians (nee Britons and Europeans) navigate the harsh conditions of the country’s interior lands. For decades, cameleers ran the outback, transporting goods, aiding explorers, and helping to establish communication and rail networks.

But when these men — who often left behind wives and families while they undertook three-year contracts — wanted to visit their home country, or take on new contracts, they had to apply for an exemption to the Policy, in order that they be allowed (back) into Australia. Many of these applications, and the photographs that accompany them, are today held in the Australian National Archive.

It was there that South Australian artist Peter Drew came across a striking picture of a man called Monga Khan, taken in 1916. He decided to use the august portrait to challenge the notion of Australian national identity and what it means to be an ‘Aussie’. 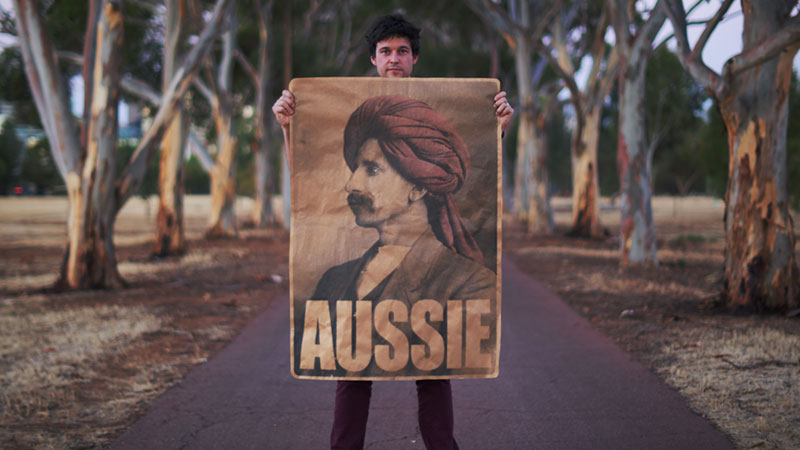 Drew has form for this type of thing. In 2013, while studying abroad for a year, he stuck up posters in East London parodying pledges made during the federal election campaign to “stop the boats” of asylum seekers increasingly arriving on Australian shores. (Oh the irony — or should that be hypocrisy? — of contenders for control of a political system established by the descendants of people who arrived uninvited on boats from foreign lands vowing to ban that very thing!)

Time and distance had not only given Drew a better perspective on identity and race issues in Australia, but “I also discovered how national identity gets imposed upon us. I realised that it’s inescapable, so why not take ownership of that identity and try to reform it?”

“Living overseas showed me what it feels like to be an outsider. Scotland (where he studied) was a very welcoming place but I still didn’t feel like I belonged. I’m sure that feeling is magnified ten-fold for asylum seekers living in Australia,” he says.

So, back home a year later, and inspired by the second verse of the national anthem that “nobody really remembers” — it goes: ‘For those who’ve come across the seas / We’ve boundless plains to share / With courage let us all combine / To Advance Australia Fair’ — Drew embarked on a project to install 1,000 posters around the country printed with the slogan ‘Real Australians Say Welcome’. 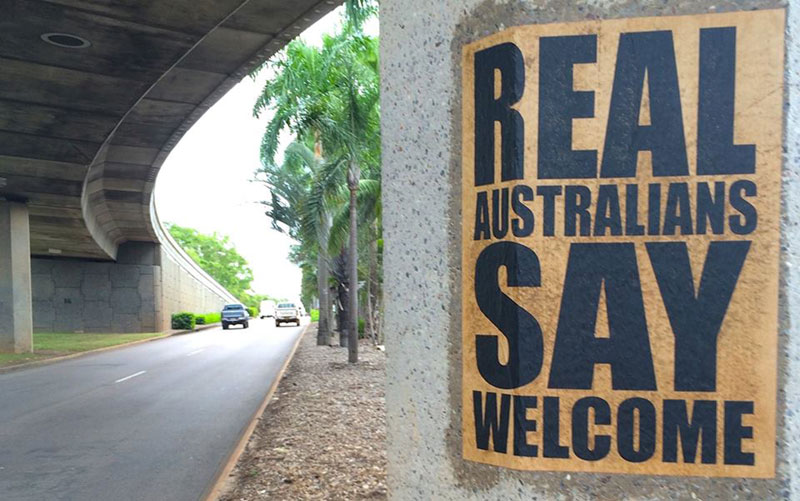 Employing that same 1,000 posters method, his Monga Khan project goes a step further (or perhaps takes a step back) to ask what even is an Aussie, anyway?

“I was sticking up a poster in Dandenong (a suburb of Melbourne) when a young Pakistani guy said ‘I think he’s not Aussie… He looks Afghan’. He was looking at Monga Khan and really thinking about it. I asked him ‘What does an Aussie look like?’ and he wondered for a moment, then shrugged his shoulders and just smiled.

Drew crowd-funded the two Australian-based projects, to cover materials for screen printing and painting the posters by hand, and his subsequent travel around the country. Both attracted hundreds of supporters, with the ‘Welcome’ campaign achieving 140% of its target, and ‘Aussie’ a remarkable 216%. (Surplus money from ‘Welcome’ was donated to charity, and leftovers from ‘Aussie’ are being used to commission other artists to interpret Monga Khan for a forthcoming book). 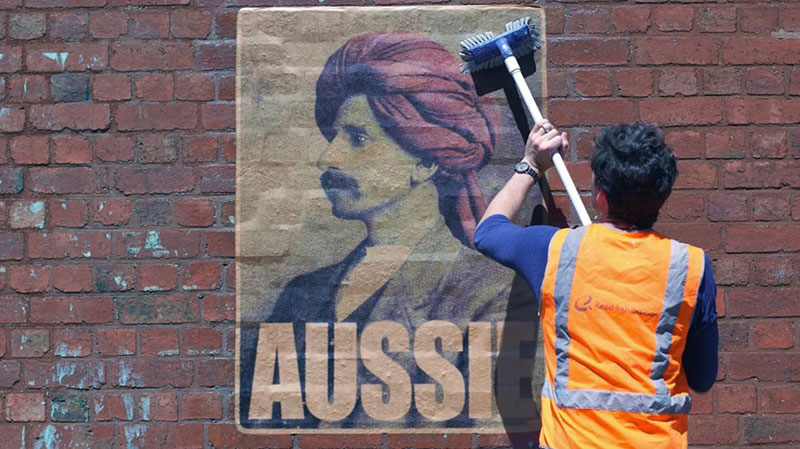 Drew says “nine times out of 10” the people he meets while out on the streets installing the posters support the message they convey. That reflects a 2015 poll which found 86% of Australians agree that immigration has a positive effect socially, culturally and economically.

Where negativity comes in, Drew says, is around “the nature of power and the way it manifests fear of outsiders”.

Politicians and media condemn the violent and oppressive actions of certain nations, races and regimes, while simultaneously condemning those trying to escape said people and places, and seeking asylum in more peaceful countries.

In 2013 Australia introduced a military-led border security strategy to intercept migrant boats before they reach Australian waters and tow them back to Indonesia. If asylum seekers do reach Australia by boat, they are sent to offshore detention and processing centres.

“I love hearing the success stories of asylum seekers, people who have been through hell, but managed to land on their feet, and still display a generosity of spirit that would inspire anybody. I meet someone like that at least once a week and it never fails to put my worries into perspective,” Drew says.

“To me, being an ‘Aussie’ is a constantly changing bundle of ideas, many of which contradict one another. But within all that there are values that are worth protecting, things like courage and generosity.” As that oft-forgotten second verse says.

Drew’s poster projects are about celebrating that courage and generosity, and the contribution that all sorts of different people — regardless of their country of origin or the colour of their skin — have made to Australia. Particularly those who might usually be overlooked.

“Monga Khan was an ordinary person, so he can become a symbol for the thousands of others who survived the White Australia Policy, and those who endure discrimination today. I want to turn Monga Khan into an Aussie folk hero. A good folk hero is an ‘every man’, someone you can identify with and really fall in love with.

He says it’s every day Australians, of all different cultures, who help make Australia the country it is.

“Australia’s greatest asset is its multiculturalism. That’s what ‘Aussie’ means to me.”