In the north of England, chemical warfare is being gently encouraged – among the shrubbery, at least.

But not all of the staff there remain unscathed. 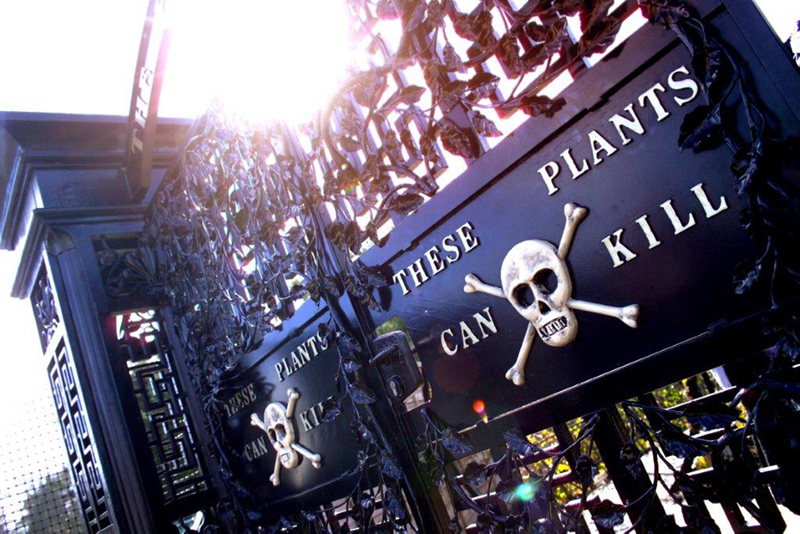 “A colleague who is a senior gardener, and should have known better, went into the Poison Garden once and forgot her gloves, so she gardened without them. She was working around a plant called Ruta graveolens, which is often used as a herb, but it’s phototoxic. If you get the sap on your skin, your skin starts to blister,” he explains. “She ended up with 3rd degree burns on her arm. And unfortunately, once this gets into your system, it’s with you for approximately seven years. So every time she goes out in the sun she has to keep her sleeves down or bandage her arm because if it’s exposed to the sunlight, then the blisters will start to form again.”

So far there have been no such mistakes or mishaps among the 350,000 annual visitors to the gardens, situated in the grounds of Alnwick Castle, home to the 12th Duke and Duchess of Northumberland.

The Poison Garden is a tightly-secured enclosure inside Alnwick’s 52 acres of garden, woodland, lawns and hedges. It comprises 90 of the most deadly plants known to man.

Tours are limited to 20 people at a time, and gloves are mandatory. “The tour guides like to put the fear of god into people before they enter. They build up this huge drama about going into the garden, because all the plants have the ability to kill. Some will cure as well, but they can all kill you. There’s a bit of a ceremony to unlocking the big gates, and locking them again behind people. And then the guides take them through the Poison Garden, telling them the gruesome stories associated with each plant.”

The garden – the first, and one of only two, in the UK – was planted 15 years ago, and is the brainchild of the Duchess, Jane Percy. She was inspired by a visit to a similar plot created by Italy’s infamous Medici family, to dispose of its enemies without leaving a trace.

Trevor says, “even in modern times people are still using plants to kill one another”, although science now makes it easier to detect poison.

“There was a case in 2010 where a spurned woman decided to get her own back on her ex-lover using a plant called Aconitum napellus. She crushed the seeds up, broke into his house, and put it in some curry he had in the fridge. He died within 36 hours. His new girlfriend was very, very ill, but survived to tell the tale. Through the toxicology report they found out that it was Aconitum, which was traced back to this particular woman, and now she’s in prison.”

Aconitum, also known as monkshood, is as deadly as it is common, just like many of the species in the Poison Garden. Take laurel, for example.

“Lots of people have laurel hedges. Well, laurel produces cyanide. We’ve had times when our guides have been telling this story, and someone will say: ‘I’ve got a laurel hedge, I once cut my hedge, put the clippings in my car to take away to the rubbish dump, and I got very light-headed’. Yes sir, you got light-headed because your car was filling with cyanide!