Taxidermy Through The Ages

Some say it’s macabre, others that it’s a second chance at life. Whatever your views on taxidermy, it is a practice that is inextricably linked with natural history collections and museums. 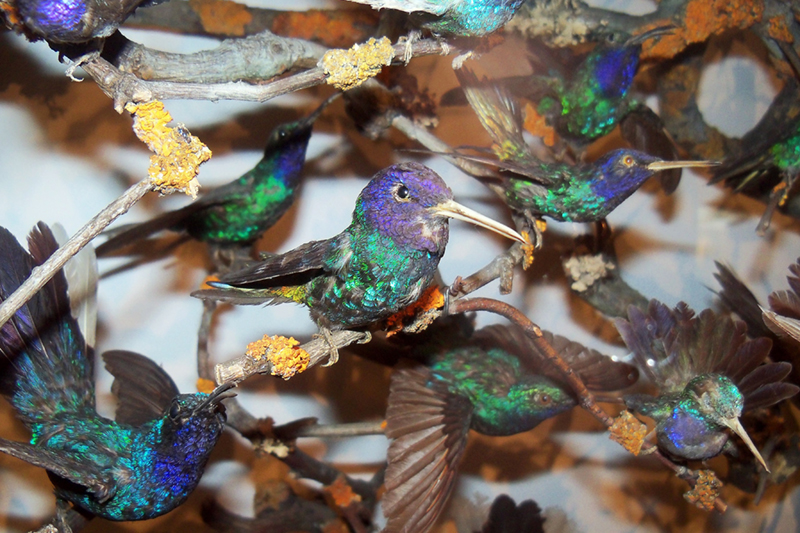 The practice of taxidermy was borne out of a desire to preserve the trophies of big game hunters, as well as the strange and wonderful specimens that began arriving in European ports as the world opened up in the age of discovery.

But early techniques were crude, cobbled together from a combination of Egyptian mummification techniques and tannery skills. While the fragrant herbs stuffed inside the animals might have masked the smell of decomposition, they did nothing to prevent decay and attack by insects. Most specimens created in the sixteenth and seventeenth centuries didn’t last long.

It’s believed the earliest surviving example of taxidermy, dating from 1623, is a Nile crocodile on display at the Natural History Museum in St Gallen, Switzerland. The reptile’s armour-like skin is said to have helped keep pests at bay. In the UK, the African grey parrot of Frances Teresa Stuart, Duchess of Richmond, is preserved alongside her life-size wax effigy in Westminster Abbey. The bird died and was prepared shortly after the Duchess’s own death in 1702, and survives to this day probably because it has been housed under a protective glass dome.

At the Natural History Museum in London, the oldest known specimens likely to have been prepared as taxidermy are a pair of hornbills from the collection of Sir Hans Sloane. These date back to at least 1753. All that now remains of them, however, is their skulls with remnants of skin attached. The Museum’s earliest known complete taxidermy specimens are six birds collected during Captain James Cook’s voyages in the 1770s.

A breakthrough in the process of taxidermy came in the 1740s when Jean-Baptiste Bécoeur, a French ornithologist and son of an apothecary, began experimenting with an arsenic-based preservative. It proved successful in keeping insects away, but Bécoeur, keen to protect his formula and his livelihood, took the recipe to his grave. It wasn’t until more than 50 years later that a similar recipe – an arsenical soap – was popularised by another French ornithologist, Louis Dufresne.

Once taxidermy specimens had protection from infestation, collections began to steadily expand. However, it took a while for the artistic and realistic qualities of taxidermy to improve. The creators of the time, without having ever seen many of the exotic species in life, were unfamiliar with the animal’s facial expression, stance or even how their skin hung on the skeleton.

Cast your mind to the popular but incongruous smiling polar bear and the “well-fed” puma at the Natural History Museum at Tring, or the famous overstuffed and abnormally wrinkle-free walrus at the Horniman Museum, London. 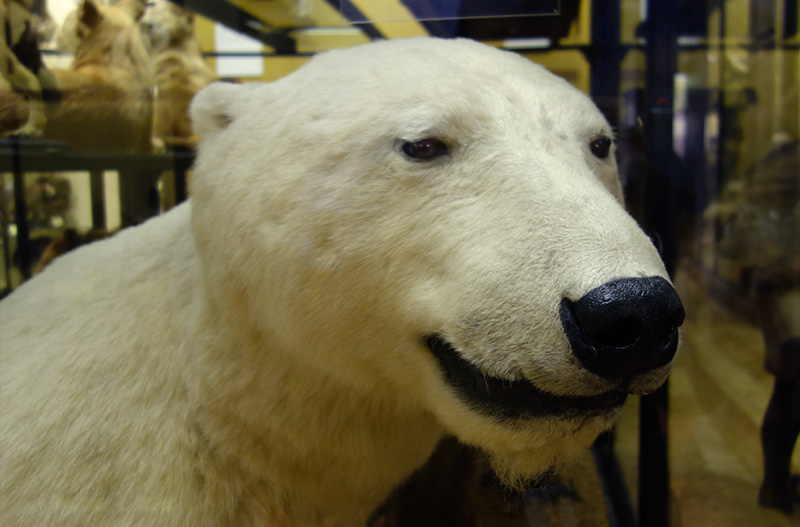 Indeed, in 1881 Sir William Henry Flower, who succeeded Richard Owen as director of the Natural History Museum, commented: “I cannot refrain from saying a word upon the sadly-neglected art of taxidermy, which continues to fill the cases of most of our museums with wretched and repulsive caricatures of mammals and birds, out of all natural proportions, shrunken here and bloated there, and in attitudes absolutely impossible for the creatures to have assumed while alive”. The same year the Museum appointed its first in-house taxidermist, Benjamin Hesse. 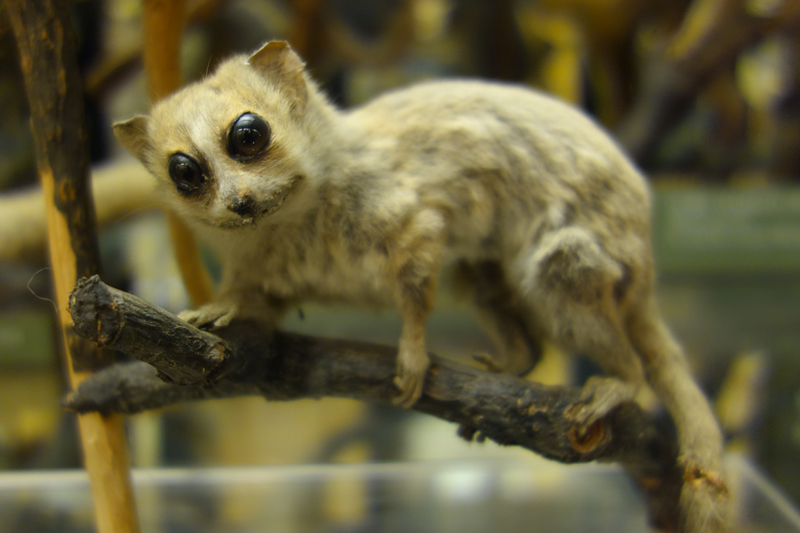 Advances in taxidermic practices were closely linked to the blossoming interest in scientific investigation of the natural world, as well as fashion and cultural cachet. Through taxidermy, natural philosophers were better able to observe, measure and understand the anatomy of the creatures they were studying, while Victorian curiosity cabinet owners could show off their ‘good’ taste and wealth.

By the early twentieth century, taxidermist Rowland Ward was fulfilling both those markets, and producing vastly improved specimens. His shop in Piccadilly, nicknamed The Jungle, was frequented by everyone from big game hunters to scientific institutions, and even purchasers sourcing items on behalf of royalty (which earned his company the accolade of Naturalists, by appointment of his Majesty the King).

Ward’s dedication to producing accurate specimens is said to have gone as far as antagonising a tiger at London Zoo just so he could create a life-like snarling beast from a skin he’d acquired. Ward was responsible for mounting many of the domestic dogs still on display at Tring, and Museum accounts show that we bought £355 5s 0d (equivalent to more than £10,000 today) worth of items from him in 1918 alone. 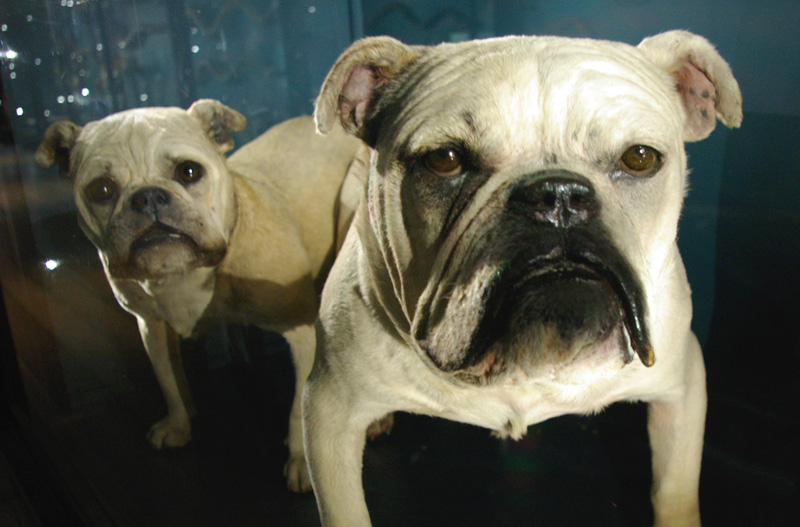 As well as buying in mounted exhibits, the Museum received shipments of zoological specimens from all over the world and employed its own staff of taxidermists to prepare them, from 1881 until 1991. The Museum’s archives hold photographs of two such men, Carl Seimund (taxidermist) and William Sherrin (articulator) at work in their studio in 1902. By the time the department closed, their job titles had been changed to that of ‘scientific officer’. The last specimens the Museum produced internally were the Bengal tiger and antelope display still on show in the Ecology gallery.

In the twentieth century, taxidermic construction techniques continued to develop. Instead of the previous practice of stuffing skins with fibres or fabrics, an internal structure was made – from wood, wire or papier-mâché, and sometimes covered in clay. Later, solid foam was employed (1960s), followed by plastics, silicones, and resins (1980s and 1990s).

However, it was during this period that taxidermy began to fall out of popular favour, perhaps as a result of the new, post-war modern direction of art and design. And in museums, collecting and conservation priorities changed, resulting in a much decreased (and in some cases, complete halt in) demand for mounted specimens.

Today, the closest the Natural History Museum has to a taxidermist on staff is bird curator Hein Van Grouw, who works at Tring. He said, “Since I was a little boy I’ve been interested in taxidermy. While everyone was going to the pub, I was doing taxidermy.” But he explained, “my job is not as a taxidermist, I’m still a curator, but I’m the only one able to make study skins, and I mounted specimens for exhibitions at my former workplace, Naturalis Museum, Holland, when they needed them at short notice. It’s not like it was in the good old days. Museums used to have lots of taxidermists but now there is nobody, except me”.

“In the past in museums, everything was mounted [stuffed], but now most of my work is with study skins. It’s nicer to make a mounted specimen than a skin, but for a scientific collection it’s far more handy to have a skin,” said Hein, citing space and storage issues, as well as the greater accessibility of a skin versus a rigid, mounted creature when it comes to scientific examination and research.

The process of preparing a skin and preparing a mounted specimen begins in much the same way. A shallow incision is made along the animal’s abdomen and the skin is gently peeled away, in a single piece, and the soft tissue removed. Anything that can rot – muscle, flesh, fat, eyes and brains – is taken out. Then the skin is cleaned and washed in a preserving agent. 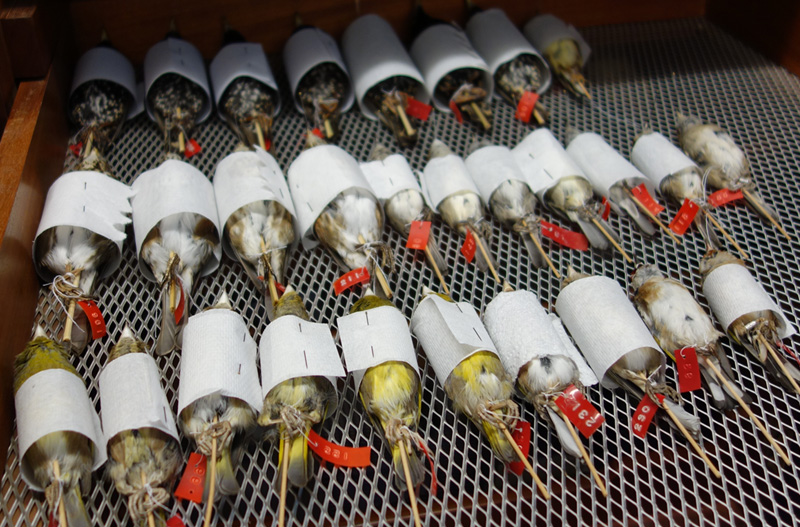 In the case of a bird study skin, the skin is filled with kapok or cotton wool, stitched together and left to dry in a stretched position before being stored in the collection for later reference. For a mounted specimen, wire is inserted in the neck and limbs to help shape and position it later and the skin is wrapped and stitched around a pre-made body form, or manikin. It is then that the artistry begins – ensuring the angle of the limbs and head, the position of the glass eyes, the lie of the fur or feathers, is correct.

It is the artistic element and the potential for poses – albeit non-traditional ones – that is making taxidermy popular again.

From anthropomorphic rodents to feathered headdresses and intricate installations, taxidermy is currently enjoying something of a renaissance. DIY classes are selling out, public demonstrations are over-subscribed, and gallery and showroom sales are booming. 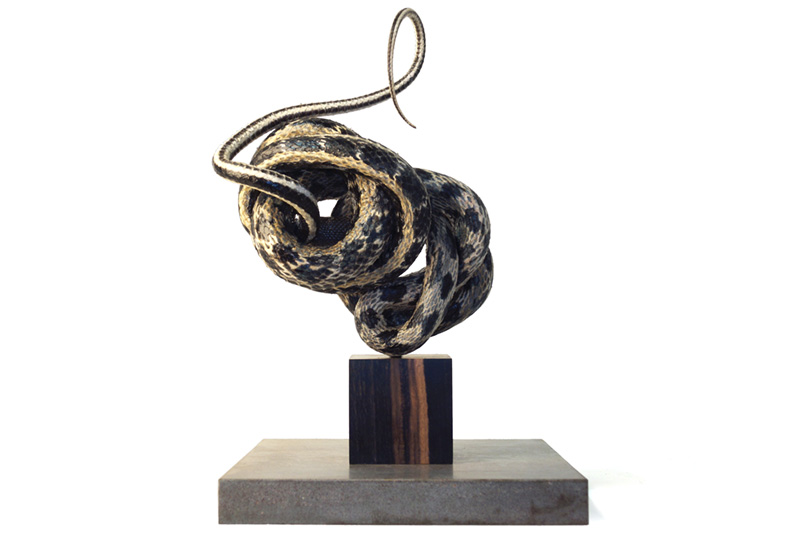 James Dickinson from the UK Guild of Taxidermists said, “We’ve seen a large increase over the past few years of people interested in using taxidermy in art, or non-traditional ways, particularly young women. At our annual conference we have about 60 attendees and 10 years ago there were maybe one or two women, whereas now it’s more like 20.”

When it comes to the DIY classes currently available, James said the guild “looks at them askance”. Instead, he recommended, “If you want to learn real taxidermy there are taxidermists out there offering two- or three-day courses where you’ll learn a lot more. It might cost more than a quick class, but you’ll learn the whole process.” However, he added that the spike in popularity seems to be a fad outside of traditional, mainstream taxidermy. “We haven’t seen an increase in young people coming along saying ‘I want to be a taxidermist’.”

“The last great rise in interest was in the 1970s and 1980s, and that came off the back of a very low point when taxidermy almost disappeared in the 1960s. But all those people who were becoming taxidermists then are ageing now and we’re not seeing new people taking on the skill.”

James is concerned about the long-term future of taxidermy in the UK. He acknowledged there’s still work for the hunting, shooting and fishing market, but the museums have by and large abandoned commissioning taxidermy. He said “as far as I know there is only one taxidermist left working in a museum, in Edinburgh, and he’s about to retire. I don’t know if there’s anyone to replace him. It’s dreadful. We’re living in a world where things are becoming extinct all the time and we’re losing the skills to be able to preserve them accurately”.

Guild member and fashion taxidermist Joanna Shears was more upbeat. “It’s absolutely brilliant that taxidermy is having a revival,” she said. “It has really helped change the perception of the craft from something old and stuffy to what it’s all about, which is the appreciation and preservation of the natural world.” But, Joanna explained, contemporary practitioners don’t tend to define themselves exclusively as taxidermists, or adhere strictly to traditional perceptions of the craft. “It’s interesting that the artist Polly Morgan, who works almost entirely in taxidermy, does not refer to herself as a taxidermist. She calls herself an artist that uses taxidermy. I think it’s important to retain the mantra that, like with any craft, you need to learn the rules before you can break them.” 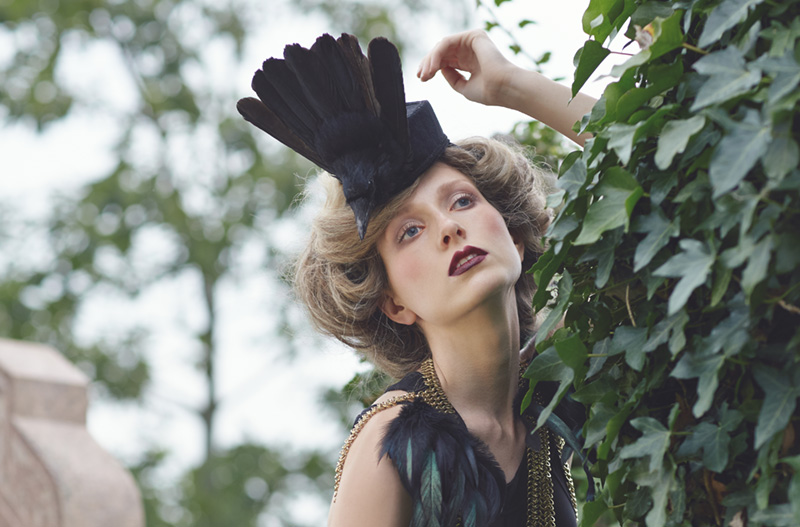