Anyone who has met me in person can vouch for the fact that I am a fan of amethyst. Almost all my jewellery contains a purple stone of some size or shade. So I was particularly interested when I heard the intriguing tale about this gem from the Museum’s collection.

From ancient Egyptians and Assyrians, and all through the ages to 21st Century new-age spiritualists, humans have long ascribed gemstones with particular properties. For example, amethyst is said to bring calmness and clarity, boost intuition, and be linked to those born in the month of February. It’s even claimed the purple quartz helps combat the effects of drunkenness.

But one of the many amethysts on display at the Museum is reputedly associated with something altogether less calm, and entirely more sinister. This item, on show in The Vault gallery and often referred to as the purple sapphire, is cursed! Its previous owner, Edward Heron-Allen – a polymath who practised law and palmistry and was an expert on violins and Persian literature – claimed the amethyst was ‘trebly cursed’ and ‘stained with blood and dishonour’.

Heron-Allen says: “I had it bound round with a double headed snake that had been a finger ring of Heydon the Astrologer, looped up with Zodiacal plaques and neutralized between Heydon’s magic Tau and two amethyst scaraboei of Queen Hatasu’s period, brought from Der el-Bahari (Thebes).” 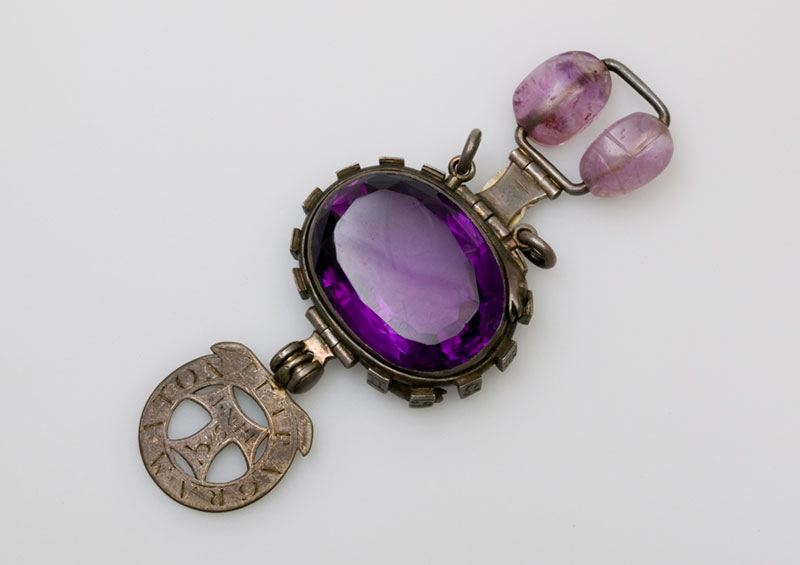 The cursed amethyst: faceted, oval, (3.5 x 2.5cm) mounted in a silver ring in the form of a snake, decorated with zodiacal plaques and with two hinged pendants, one of which bears two scarabs of amethystine quartz, the other a T in silver, engraved, © The Trustees of the Natural History Museum, London

The amethyst was donated to the Museum by Heron-Allen’s daughter in January 1944, along with a letter (see the full text further below) written by Edward warning against anyone handling it. Heron-Allen writes that the stone “was looted from the treasure of the Temple of the God Indra at Cawnpore during the Indian mutiny in 1855 and brought to this country by Colonel W. Ferris of the Bengal Cavalry. From the day he possessed it he was unfortunate”.

After Colonel Ferris’s death the amethyst was passed to his son, then to Heron-Allen, who in turn passed it onto various friends, upon which it reportedly inflicted a trail of suicides, apparitions, disasters and failed careers. Eventually it came back to Heron-Allen, who packed it in seven boxes and deposited it in a bank safe, enclosing his warning letter, and instructing that the amethyst not ‘see the light again’ until 33 years after his death. (His daughter waited less than 12 months to present it to the Museum!)

But, unfortunately for all you horror and conspiracy fans out there, the cursed amethyst story is, apparently, more tall tale than treacherous truth. I have been assured by one of our Museum mineral curators who has dealt with the amethyst that there is “no clear suggestion of any truth in it”; that is, at least as far as Edward Heron-Allen is concerned. In fact, what is most likely is that Heron-Allen fabricated the legend to give credence to a short story he wrote in 1921 under the pseudonym Christopher Blayre, called ‘The Purple Sapphire’.

But that’s not to say the whole thing is a sham. Over the years several people, while researching their family genealogy, have contacted the Museum to say that they have discovered strong similarities to some of the elements of misfortune recounted by Heron-Allen in his letter. Most interestingly, these families all had some connection with places that Heron-Allen knew, especially Lewes, Sussex.

The conclusion that our Museum scientists have come to, is this: Edward Heron-Allen may have met an aged ex-army Colonel or General either in the course of his work in London, or in some gentleman’s club in Lewes, and heard tales of army life in India, and decided that these would make a good story. Then, years later when he wrote the story, he had the amulet created to make his tale plausible, but perhaps couldn’t afford or wasn’t able to obtain a large sapphire, so made do with an amethyst.

Of course we can never really know the full story, and as such, I feel compelled to sign off this blog with the final six words from ‘The Purple Sapphire’ book: “And then I wonder many things”…

To – Whomsoever shall be the future possessor of this Amethyst. These lines are addressed in mourning before he, or she, shall assume the responsibility of owning it.

This stone is trebly accursed and is stained with blood, and the dishonour of everyone who has ever owned it. It was looted from the treasure of the Temple of the God Indra at Cawnpore during the Indian mutiny in 1855 and brought to this country by Colonel W. Ferris of the Bengal Cavalry. From the day he possessed it he was unfortunate, and lost both health and money. His son who had it after his death, suffered the most persistent ill-fortune till I accepted the stone from him in 1890. He had given it once to a friend, but the friend shortly afterwards committed suicide and left it back to him by will.

From the moment I had it, misfortunes attacked me until I had it bound round with a double headed snake that had been a finger ring of Heydon the Astrologer, looped up with Zodiacal plaques and neutralized between Heydon’s magic Tau and two amethyst scaraboei of Queen Hatasu’s period, brought from Der el-Bahari (Thebes). It remained thus quietly until 1902, though not only I, but my wife, Professor Ross, W.H.Rider, and Mrs Hadden, frequently saw in my library the Hindu Yoga, who haunts the stone trying to get it back. He sits on his heels in a corner of the room, digging in the floor with his hands, as of searching for it.

In 1902, under protest I gave it to a friend, who was thereupon overwhelmed with every possible disaster. On my return from Egypt in 1903 I found she had returned it to me, and after another great misfortune had fallen on me I threw it into the Regent’s Canal. Three months afterwards it was bought back to me by a Wardour St. dealer who had bought if from a dredger. Then I gave it to a friend who was a singer, at her earnest wish. The next time she tried to sing, her voice was dead and she has never sung since.

I feel that it is exerting a baleful influence over my new born daughter so I am now packing it in seven boxes and depositing it at my bankers, with directions that it is not to see the light again until I have been dead thirty three years. Whoever shall open it, shall first read this warning, and then do so as he pleases with the Jewel. My advice to him or her is to cast it into the sea. I am forbidden by the Rosicrucian Oath to do this, or I would have done it long ago.