Why do guitars taste of hops? It wasn’t a question I’d ever considered until I saw it posed as the title of a multi-sensory beer and music matching event.

I was intrigued; and as a casual ale drinker, keen music fan, and a writer with an interest in science, I felt compelled to investigate.

And so I found myself in an East London pub on a Wednesday night with a questionnaire, candy, a peg and a bunch of empty glasses in front of me. 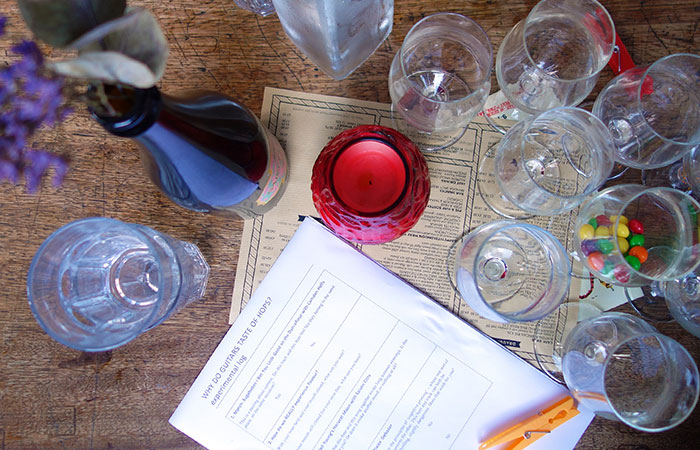 Our host for the evening was Pete Brown, a writer and beer consultant who promised to help us explore “the wonderful and frightening world of beer, music and brain”.

After a “palate cleanser” of lager and a blast of the Sugababes’ cover of Arctic Monkey’s ‘I Bet You Look Good on the Dancefloor’ (both said to be associated with gearing up for a night out), we got down to business.

Or science, I should say.

Because the underlying principle of Pete’s event is something called crossmodal perception, and there’s a whole laboratory at Oxford University dedicated to researching it.

I spoke to the head of that lab, Experimental Psychology professor Charles Spence, after the event and he explained: “Crossmodal perception is the idea that what happens in one of our senses can affect our perception in the others.”

“Over the last 10 or 20 years we’ve increasingly realised how much the senses influence each other. By changing what people hear, you can change what people smell or taste or what flavour they experience.”

Charles said musical stimulus can change our perception of taste by an average of 5–10%, but there was a potential to “get higher than that” with further study.

While Pete admitted that his findings were drawn more from experience (a love of 80s indie and beer) and personal experimentation than academic study, his results correlate with what Charles and his team have identified. That is: high-pitched music tastes sweet, while lower-pitched music is bitter.

To prepare us for the audio-gustatory pairings to come, Pete guided us through an experiment to demonstrate how we actually experience flavour. This is where the peg (placed on the nose) and the candy came into play.

What you’re experiencing is called retronasal olfaction and it goes to show that taste isn’t confined just to your mouth.

And so, on to the booze and the tunes.

Via Neil Young and a citrus saison we evoked long summer evenings, then compared descriptions of the Pixies and Belgian ale and were energised.

After a short intermission and toilet break (soundtracked by John Cage’s 4’33’’) we put our sensory perceptions to the test and mapped sound clips to the four basic tastes.

We assessed the acidity of fruit beer pre- and post- atonal dissonance, then assigned a chocolate stout and a bitter porter to either a classical or classic rock track.

At the end of it all our minds felt both expanded and a little pickled.

But why do guitars taste of hops? Well, there are several answers to that, Pete said.

“One is that the neuroscientific theory of crossmodal perception suggests that sweetness ‘sounds’ high-pitched, harmonious and melodic, so chiming guitars — especially a Gibson semi-acoustic twelve string — picks up the citrusy sweetness in new world hops.

“But there’s a less technical answer too. A huge amount of flavour matching is based on the sum total of our experiences, tastes and preferences. I love guitar music and hoppy beers and for me they go together really well!”