The scientist-turned-detective-turned-distiller who made it his mission to restore the reputation of an infamous spirit and reintroduce it to a new generation.

Ted Breaux, a research scientist from New Orleans, USA, was well accustomed to analysing samples of water and looking for tiny traces of contamination as part of his day job.

So it wasn’t surprising that, around 20 years ago, his curiosity was piqued by the mystery of exactly what it was in absinthe that had turned the once-popular medicinal tonic and digestif into something sinister.

But what he could not have predicted was that “my whole career (would be) kidnapped, abducted, by absinthe”. 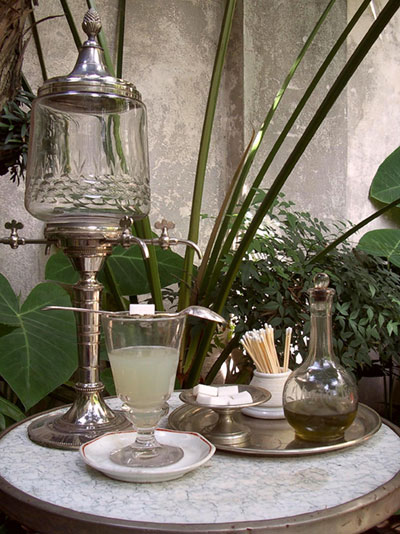 The culture of New Orleans is inextricably linked with France, and as such, several of its most popular historical cocktails call for France’s once favourite, and most infamous, tipple.

But the imagery and mentions of absinthe that increasingly began catching Breaux’s attention in the 1990s were not the celebratory style of La Belle Epoque, ‘the beautiful era’, but of the cautionary and threatening nature which came afterwards, when the wine industry and the temperance movement were a driving force behind the call for absinthe’s outlaw.

It had been claimed that thujone, a chemical compound found in Artemisia absinthium (also known as Grande Absinthe or Grande Wormwood), one of absinthe’s three key ingredients, produced symptoms in drinkers ranging from convulsions to hallucinations to insanity.

However, from the mid-to-late 1800s when opposition began to grow, to the point at which the drink was outlawed in the 1910s, right up until Breaux began to take notice, there had never been a credible, scientific investigation into whether thujone — or any other ingredient in absinthe — was really so bad.

“It was amazing that something like this, a mystery like this, could go unsolved for so long, despite the advent of modern science,” Breaux says. And so, he decided to settle the matter himself, once and for all.

At that time, authentic absinthe was illegal in the US (and much of the rest of the world), and the products on the market claiming to be ‘absinthe’ were “nothing more than flavoured vodka with green dye and promises of hallucinations and all sorts of absolute rubbish”.

A true absinthe must contain three specific ingredients — “the holy trinity” — Artemisia absinthium, Pimpinella anisum (green anise; not to be confused with star anise), and Foeniculum vulgare (sweet fennel). In order for Breaux to conduct his investigation, he would need to sample vintage, pre-ban absinthe.

“In 1996 I happened across, by sheer stroke of luck, two bottles of vintage absinthe, two of the top brands, from the pre-ban days. Those bottles proved to be the Rosetta Stone,” he says.

“In 2000 — by that time I had acquired more samples of vintage absinthe — I found myself in possession of a mass-spectrometer, and I was able to get the machine calibrated to analyse samples of spirits. I was looking in those bottles for anything that was poisonous, or deleterious, or something that would have drug-like effects.

“I tested the top brands of the 19th Century, the biggest brands exported globally, and I couldn’t find anything wrong with any of them. I was waiting to find out what this mystery ingredient was that was causing all these problems, and I found nothing.”

Absinthe was first created in Switzerland at the end of the 18th Century, as a herbal tonic given to soldiers (it was known then, as now, that sweet fennel and green anise alleviate stomach complaints), before becoming more widely prescribed and imbibed. It tasted nice and was quite potent, and soon became a popular drink across Europe, particularly amongst the French bourgeoisie and bohemians. Happy hours became known as ‘the green hour’, and the hallucinatory and inspirational effects of absinthe were said to be imbued by ‘the green fairy’.

But what Breaux’s research showed was that there was no such hallucinatory, or particularly harmful, ingredients in absinthe. Its notorious effects were purely down to the overindulgence and/or indigence of its drinkers.

“Try living one day as a 19th Century bohemian artist: wake up in the morning, eat a couple of pieces of bread, make a coffee, smoke a pipe, eat a piece of cheese for lunch… You don’t eat a whole lot. Five o’clock rolls around, and you knock back four or five absinthes, and you know about it!”

Technically speaking: on average, the thujone concentration found in the pre-ban samples of absinthe was 25.4 mg/L, a level at which it’s “impossible to ingest enough to affect the central nervous system… Long before that could happen, anyone would be too intoxicated from the alcohol,” says Joachim Emmert, head of the toxicology department at the University of Heidelberg in Germany, one of the co-authors of Breaux’s research. Current regulations say absinthe can contain up to 35 mg/L of thujone. Furthermore, thujone is, at worst, a convulsant, and has no ‘recreational’ effects.

The discovery that absinthe’s dangerous reputation was all down to negative propaganda “created a paradigm shift in my understanding” Breaux says, and sparked a shift in the direction of his career.

At this point, he was “in a very lonely club” of people who had tasted 19th Century absinthe and were still alive. Armed with his scientific analysis, and all the published and unpublished information he’d collected about pre-ban absinthe distillers and their products, Breaux realised he had everything he needed to accurately recreate authentic absinthe for the discerning 21st Century drinker.

Absinthe was still illegal in the United States at this point, so Breaux travelled to France to look for a place where he could set up his own distillery. A 1988 European Union directive regulating food and drink laws had essentially decriminalised absinthe, discreetly lifting its ban in countries such as Germany, Belgium, Holland, and France.

In 2003 Breaux came across the Combier distillery — designed by Gustav Eiffel in the 1880s — in Pontarlier, France, and says it was like “finding a goldmine”. 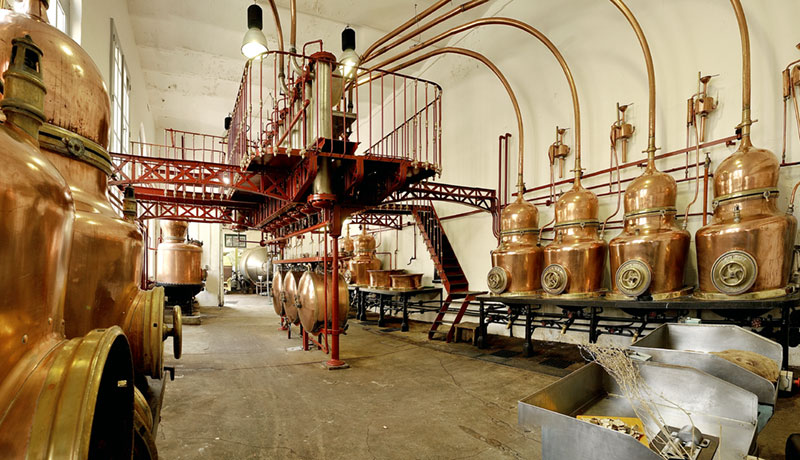 He began operating there as Jade Liqueurs in 2004, carrying out every step of the absinthe-making process by hand, to exacting, historically-accurate standards. His base spirit – a proprietary French recipe — is derived only from specific grape varietals and terroir. He uses only botanicals of the correct original variety, regional origin, and essential oil characteristics, going so far as to personally cultivate two of the most critical, and historically-significant Grande Wormwood plants on site — “it’s that specific, what I do is that specific”. These ingredients are distilled in Combier’s c1870s hand-built 1,150L copper bain marie alembics, and allowed to age for three years before being bottled, corked, and wax-sealed by hand.

The first product Breaux produced was Nouvelle-OrlÉans, an homage to the absinthe-laced elixirs French apothecary Antoine Peychaud doled out from his shop on New Orleans’ Royal Street from the mid-19th Century. He created three more varieties — C.F. Berger (Verte Suisse 1898), Esprit Edouard, and Jade 1901 — over the next two years.

Then in 2007, he learned the hard way that sometime after that aforementioned EU standardisation, someone in the French Ministry of Health had quietly passed a decree that reinstated the country’s 1915 ban on absinthe, along with its associated penalties. Jade Liqueurs was the only producer in the country found in violation, “which says something about the authenticity of my products, which is great, but at the time, it was a scandal”.

Authorities seized 15,000 litres of distillate he had ageing, charged Breaux thousands of Euros in fines, and threatened him with prison. But, “after all the dust settled, we had the audacity to go to the French government and challenge the law. We challenged the scientific basis of the law — there was none, as we already knew. And they sensibly agreed.”

It eventually took until the summer of 2009 to get the last vestiges of the French law changed: “It took a while, I didn’t get my money back, but you can now actually put the word absinthe on a label in France. Whereas before that you couldn’t, you had to basically call it an alcoholic beverage that contains absinthe plants. Crazy.”

In the meantime, the scandal and subsequent legal challenge attracted the attention of the press back in his home country, as well as that of some American entrepreneurs, who offered to put up the finance, if Breaux supplied the science, to get absinthe legalised in the States, too. And that they did, in March 2007.

Today, Breaux produces five varieties of absinthe, as well as a tobacco liqueur and cocktail bitters, and is recognised as an authority on the subject of absinthe, and Victorian-era botanical medicines and how they were incorporated into spirits.

“This was never my career plan. This whole thing just sort of blew up, it’s crazy, but it is what it is, and I’m glad to be a part of it. I feel like I have a responsibility to disseminate good information and make sure the wrongs of the past aren’t repeated. I think the world of spirits and cocktails is a much better place with absinthe in it.”

He adds, “I’ve got a lot of other things up my sleeve, and they’ve all got great stories, which are well over a century old. It’s always good when you can drink history, that’s what I’ve discovered. History’s a lot more fun when you can drink it.”