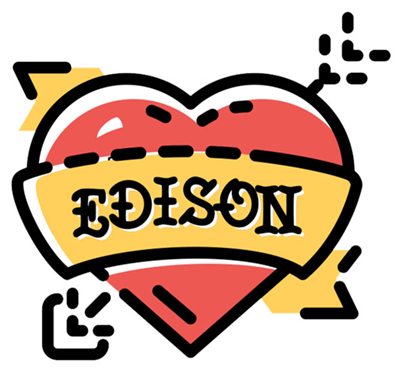 He was responsible for some of the most ground-breaking and influential developments in the fields of telegraphy, electricity, sound, and motion picture. But there were plenty of flops, too.

Like his stencil pen of 1875. It was a mechanical device intended to make the duplication of documents easier. As the user ‘wrote’ with the pen, a battery-powered motor drove a needle up and down, poking holes in a piece of paper to create a stencil. An inked roller passed over the stencil would then transfer the words onto pages underneath.

But consumers found the stencil pen unwieldy, and advancements in the typewriter and carbon paper markets that same decade meant Edison’s invention was a commercial failure.

Despite this, it has made a lasting impression around the world.

In 1878, Samuel O’Reilly, a hand-poke tattoo artist, saw one of Edison’s pens languishing in a New York shop window, and inspiration struck.

He modified the pen’s shaft to make it easier to hold, added an ink reservoir that the needle would pass though, and in 1891 patented it as a tattoo machine.

O’Reilly’s modification of Edison’s stencil pen made tattoos faster, cleaner, and the designs crisper, than the hand poke method. O’Reilly’s business, and his machine, took off.