There was a time when astrology and astronomy were not so scientifically, diametrically opposed. A time when German astronomer and mathematician, Johannes Kepler, wrote horoscopes for the royal court while also writing requests to the Duke for money to build a pioneering new model of the solar system.

This was the turn of the 17th Century and Kepler had developed a theory about the geometric relationship between the number of planets and the size and motion of their orbits, based on the five Platonic solids. He set out his “major inventum in astronomy” in a self-published book called ‘Mysterium Cosmographicum’, printed in 1596. 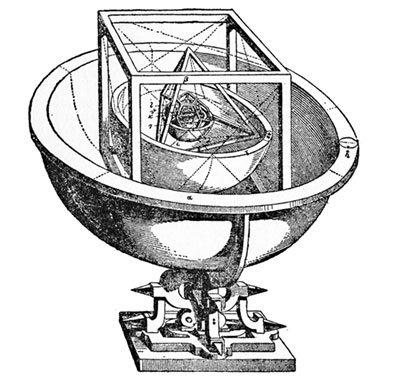 But to “fittingly and gracefully” demonstrate his idea, Kepler wanted to build not just the world’s first mathematical cosmological model, but possibly also the world’s most elaborate punch bowl. He dubbed it a ‘cosmic cup’, and sought funds to have it crafted in silver.

Seven taps (none for Earth, but one each for the Sun, Moon and five other planets) would dispense different beverages based on the astrological attributes of the source. Water from the moon, a strong distilled liquor from the Sun, brandy from Mercury, mead from Venus, from Mars a vermouth, and Jupiter a white wine. Finally, from Saturn, would flow a bad old beer or corked wine, so those ignorant of astrology “could be exposed to shame and ridicule” (Saturn being associated with old age and learning hard lessons).

While it turned out that Kepler’s polyhedral hypothesis was flawed (and the silver cup never came to fruition), it was an important first step on the path to defining his three laws of planetary motion, which stand to this day.

And it represents a time when Kepler was not just breaking new ground in maths and science, but in astro-epicurean snobbery, too.