By the time you read this, Arber’s will be gone. WF Arber and Co Ltd printing works, run by three generations of Arber men over 117 years, shut its doors for the last time this month, marking the end of one of the oldest surviving businesses on Roman Road. 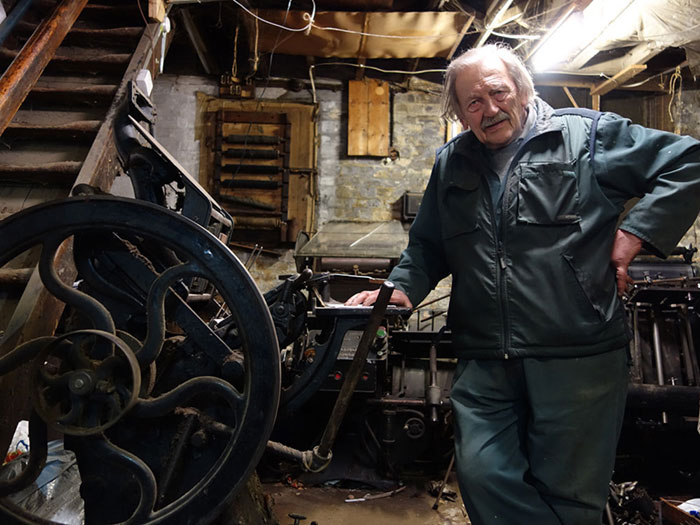 Gary Arber with the 1900 Golding which printed the Suffragettes materials

I met Gary, the final proprietor and grandson of founder Walter Francis, in March, as the big clean-up and clean-out of his notoriously disorderly shop was in the early stages.

Gary laid the blame for the “death” of Arber’s squarely at the feet of Tower Hamlets Council, citing high business rates and harsh parking restrictions. But despite an understandable grudge against the local government, Gary said he had no regrets about closing down, and that he wouldn’t miss the place.

“No,” he said, “I’m a wildlife photographer in my other life. I’ve got a big garden with three greenhouses and three ponds, so plenty to occupy me. And I’ve got a wife who’ll find me jobs. I’ll be too busy (to miss it).”

There was no possibility of a fourth generation taking over, Gary said: “My children didn’t want to know. They’re girls, and I was strict, got them a good education, so they’re too posh.” But then again, Gary hadn’t intended to take over the business from his father back in the 1950s, either. Although he had worked casually at the shop as a teenager, his first career choice was that of a pilot.

“I was called up for national service at the age of 18 and I went into the air force. I wanted to be a pilot, but they said you can’t be a pilot in national service because it’s only two years, so I signed on for eight years and I was actually flying Lincoln bombers,” he explained.

“But my father, who was running the place, got a disease called nephritis, which attacks the kidneys. Dialysis wasn’t invented then, so he died and I had to buy myself out of the air force in 1954 and run this place. There was about 14 people working here, plus my aunt in the toys, so someone had to run it. And that was the end of my RAF career.”

Walter Francis Arber and his wife Emily started the company in 1897, Gary recounted. “My grandfather was a box maker. He started making cardboard boxes and packaging, but of course people wanted printing on it. Instead of sending it out to be printed, he decided to get a press and start to print them. In the end the printing became more of the business, it overtook the box making. The company also ran a toy shop. While the men – my grandfather, my uncle, my father and the rest of them – were running the printing, my grandmother and then my aunt ran the toy shop.”

“The business carried on right through the First World War; my grandfather spoke about standing in the door and seeing the zeppelins flying over. It gradually built up, and by the time of the Second World War there were six presses here, and we had contracts printing for the government.  One of the machines, the Heidelberg, that’s made in Germany and was delivered in the summer of 1939. The war started before we paid the Germans for it so we had to give the money for it to the British government; whether they gave the money to the Germans five years later when the war ended, I don’t know.”

In the early days of Arber’s, all the printing took place in the cellar and the toys occupied the ground floor. Upstairs was home to Walter, Emily and their five children. But as the business grew, the family moved out, and the type-setters, or compositors, moved onto the first floor (formerly the family parlour, complete with piano), the four-foot guillotine was moved into a shed in the backyard, and the top floor was used for paper storage. At its height, Arber’s had around 14 members of staff dedicated to printing.

Gary in the compositors room, formerly the family parlour, on the first floor

“We carried on printing until about the 1970s. But then I had a sort of disagreement with the factory inspector and got myself crossed of the factories list,” Gary explained.

“I had this woman, she was a very officious factory inspector, and she came in and said ‘That staircase has got wear on it, gotta have a new staircase. The machines, they’re dangerous’, and up where they set the type, because it was the old front parlour with nice wallpaper, she said ‘This is an industrial workshop, it’s gotta be whitewashed’. The blokes that worked there said they liked as it was with wallpaper. Well anyway, this woman, what she said was absolutely impossible, so I said: ‘Madam, if you go up to the traffic lights and turn right you’ll come to a little roundabout, turn left there and you’ll find a lake, go and jump in it’. I think I upset her. After that I had to sack everybody because I wasn’t allowed to employ anybody anymore, so I just carried on on my own.”

In his 60 years at the helm of operations at 459 Roman Road (and many more visiting his grandfather and father at the shop before that), Gary has seen a lot of change in the area: from the closure of Coborn Road station, which used to bring workers to the factories, to the factories’ eventual closure in order to make way for tower blocks, to the peak and fall of the market itself.

“I can remember,” he said, “Before the war, as a child, at eight o’clock at night the market would still be flourishing, crowds of people, lamps on their stalls…

“You could buy anything. There were toy stalls, vegetable stalls, eel stalls with live eels in buckets underneath. I remember my grandfather had an old dog and one day he come in with a whopping great eel in his mouth, chewing away, that he’d pulled out of a bucket under a stall out there. It was a living market. People came for miles to shop here, crowds of people, you couldn’t see the pavement for people on a Saturday and the market was really busy, pitches would change hands for £6000. But the parking started to kill it. People have to pay to park on the side roads. People have to have a permit to park outside their own houses,” he lamented.

Gary talks about the shops that used to share Arber’s block on Roman
Road:

Perhaps one of Arber’s (and indeed, Bow’s) greatest claims to fame is its association with the Suffragettes.

“It all happened ‘round here; The Pankhursts were in Ford Street,” Gary said, “My grandmother was one of the Suffragettes, and she made my grandfather print all their leaflets and posters , and she wouldn’t let him charge for it. My grandfather didn’t like that because he was more right-wing than my grandmother, who was left-wing, but he had to do what he was told. So we’re now in history as the Suffragettes’ printers.

“It was all before my time, and it’s a bit of a shame really, because old grandmother, once she got her vote, she just got on with her life and never spoke about it. The only thing I ever got from her was back when the Krays were sort of ruling the manor. The Krays had thrown someone in the canal and I was saying about this and my grandmother said: ‘Oh, when we were in the Suffragettes we threw this man in the canal, and we were pushing him down with a pole,’ and that’s all I ever heard from my grandmother about her Suffragette days,” he said.

But Arber’s Suffragette legacy has not ended with the closure of the shop. The machines that printed the historic handbills and posters that called for, and helped to win, votes for women – the 1900 Golding and Wharfdale – will live on in a “working museum” in Happisburgh, Norfolk.

When news of Arber’s closure was first made public in February, Catseye Press contacted Gary with an offer to remove, restore and showcase as many of the historic machines as he would allow. Along the way they even discovered that one of the six presses, the 1946 Lagonda, was the last known working model of its type in the world.

“I got a phone call from this chap from Catseye Press. I said I’m giving (the presses) away to anyone who comes and takes them. I don’t want anything for them, I just want them taken away. He said: ‘When are you there, when’s the best time to come?’ Him and his brother came down here into the cellar and said they’d have the lot.”

Under the stairs that lead into and out of the cellar, just next to where the Lagonda and Golding presses stood, are the hand-scrawled names of former Arber’s workers, along with the years in which they served. Among them is Gary’s own contribution, written in lead pencil, which reads: ‘All the time’. 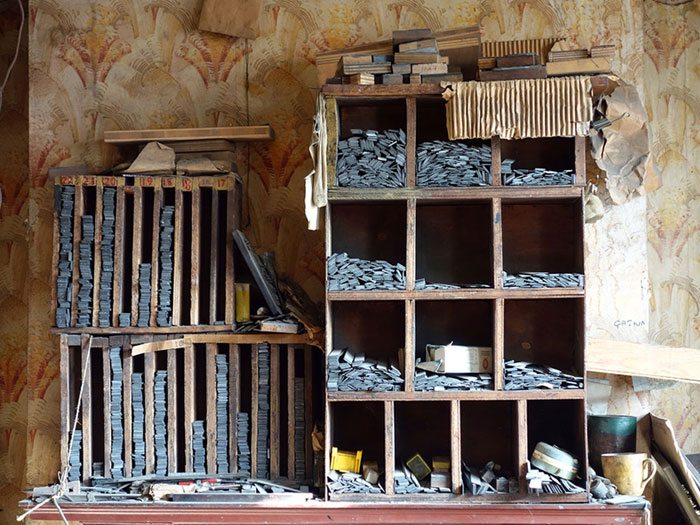 Type spacers, in the compositors room on the first floor 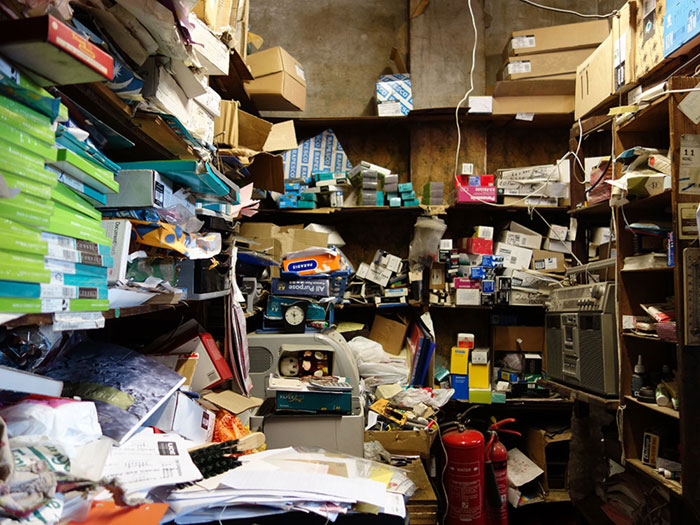