Cousins Across The Centuries

The most famous symbol of human-caused extinction – the dodo – and the ubiquitous pigeon have more in common than you might think. 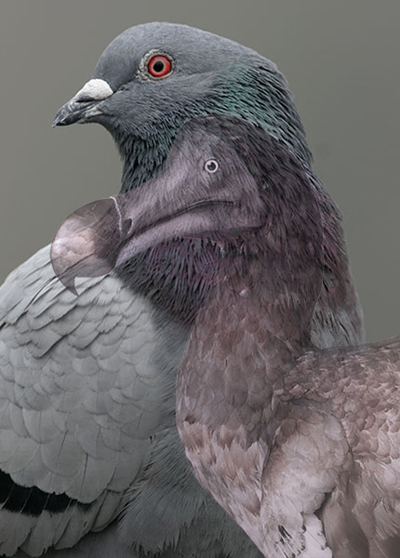 If you had been walking the narrow, cobbled streets of seventeenth-century London, your nose assaulted by the stench of sewage, edging your way along against the Tudor buildings for fear of being hit by waste thrown from the windows above, you might have stumbled across something wonderful.

For in London at that time – near Lincoln’s Inn Fields around 1638 – was housed the one and only irrefutably proved dodo to make it alive to the UK.

Historian and theologian Sir Hamon L’Estrange documented his encounter with the now famously extinct bird in a manuscript commenting on Sir Thomas Browne’s Pseudodoxia Epidemica (or Vulgar Errors). He wrote, “As I walked London streets, I saw the picture of a strange fowle hang out upon a … [a burn hole occurs here in the manuscript] and myself, with one or two more then in company, went in to see it. It was kept in a chamber, and was a great fowle, somewhat bigger than the largest turkey-cock, and so legged and footed, but shorter and thicker, and of a more erect shape, coloured before like the breast of yong cock fesan, and on the back of dunn or deare coulour. The keeper called it a Dodo”.

As you are walking the bustling, bituminised streets of twenty-first-century London, your airways assaulted by exhaust fumes, weaving your way around meandering tourists, you will inevitably come across something at first considered banal, but which is actually quite significant.

For scientific research – a joint investigation between Oxford University and the Natural History Museum – has irrefutably proved that the humble pigeon is in fact related to the iconic dodo. One of the authors of the research and former Director of the Henry Wellcome Ancient Biomolecules Centre at Oxford University, Alan Cooper, says we can conclusively say that the common pigeon we see in the UK today is a distant cousin of the dodo.

Throughout history, the dodo – initially Didus ineptus, now Raphus cucullatus – has been linked with avian groups ranging from ratites to raptors, but was most likely presumed to be part of the Columbidae family (pigeons and doves), although without genetic testing, it was impossible to know exactly where it sat in the family tree.

DNA from a mummified dodo housed in Oxford University Museum of Natural History, the most complete dodo specimen in the world, was compared with samples from 37 species of pigeons and doves, the extinct Rodrigues solitaire, and multiple members of relevant sub-families.

It was found that the dodo and the solitaire are ‘sister taxa’ and that they are both nested within the family Columbidae. The Rodrigues solitaire, Pezophaps solitaria, was a flightless bird endemic to Rodrigues Island; which neighbours Mauritius. The closest living relative of the dodo is the Nicobar pigeon, Caloenas nocobarica, from Southeast Asia.

Oxford’s dodo specimen has long been rumoured to be the very same as the live bird Sir Hamon L’Estrange documented from the 1630s. But Oxford vertebrate collections manager Malgosia Nowak-Kemp cautions against making such an assertion. “There is absolutely no proof, as far as I know”, she says. “The same statement is repeated over and over again, but nothing new has been discovered to support, or indeed, disprove it”.

What is known about the Oxford specimen is that it was originally part of the collection of John Tradescant (gardener to Charles I) and his son John the younger. It was a mounted piece housed in the family’s private collection in Lambeth, known as The Ark. The collection was acquired by John Jr’s friend Elias Ashmole on the former’s death in 1662, and donated to the nation on condition that it was housed in a purpose-built Museum. Oxford’s Ashmolean opened to the public in 1683, and is the oldest Museum in the UK and one of the oldest in the world.

All that remains of the dodo today is a mummified head and foot, after the rest of it was destroyed by pests. Also in the Oxford Museum is a painting by Jan Savery, based on the complete Tradescant specimen.

There are scant historical records in regard to any live dodos outside of Mauritius. Some authorities suggest a figure of 17 exports, however, aside from the aforementioned London dodo, there are only three other documented sightings of live specimens off the island, plus one other unsubstantiated clue.

Between 1628 and 1634 two live birds were reported in the menagerie of the Mogul emperor Jahangir in Surat, India. In 1647 a live dodo is recorded as being shipped by the Dutch from Mauritius, via Batavia (now Jakarta) to a small island off Nagasaki, and presented to the Lord of Hakata.

The third account comes from a 1626 pen and ink drawing by Adriaen Pietersz van de Venne. The caption accompanying the illustration mentions a live bird in Amsterdam. Interestingly, the image is very similar to, and produced in the same year as, Roelandt Savery’s famous dodo painting, which hangs in the Museum’s Images of Nature gallery. Roelandt (uncle of Jan) was living in Amsterdam at the time, too. 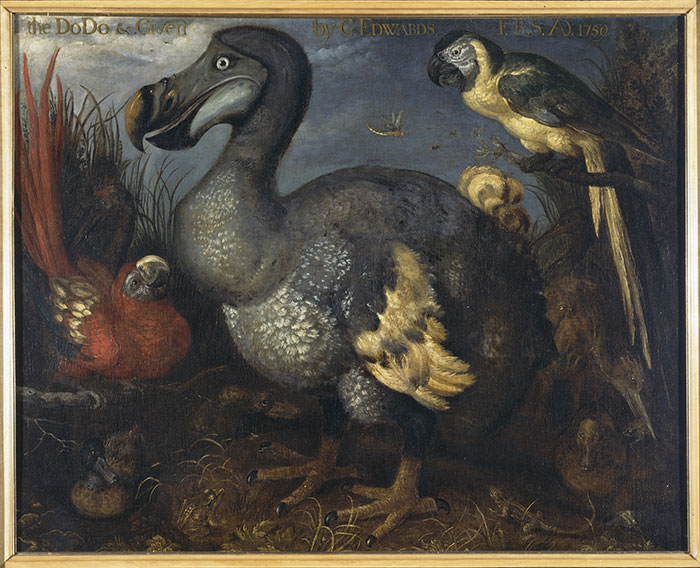 One other tantalising reference comes in the form a letter from English diplomat Emmanuel Altham to his brother, sent in 1628. Altham, stationed in Mauritius at the time, wrote that he was sending a dodo home as a present to his family, but there is no record as to whether it arrived alive, or indeed at all. Perhaps it and the Lincoln’s Inn Field dodo are one and the same? But we’ll never know for sure.

What we do know is that in public collections in the UK today there are probably upwards of 3,000 dodo specimens – loose bones and mounted skeletons reconstructed from multiple individuals. The Oxford dodo is the only specimen with surviving soft tissue anywhere in the world.

The Museum has three mounted skeletons, the most complete of which is on display in the Treasures gallery. The collection also includes two casts of a preserved foot which went missing sometime in the late 1800s or early 1900s, plus casts of the Oxford dodo head, as well as around 50 loose bones collected at the Mare aux Songes fossil site. Almost every single dodo fossil bone in the world today – or 99.9 per cent, as avian palaeontologist Julian Pender Hume predicts – comes from the Mare aux Songes site. The fossil-rich site was discovered in 1865, and lies just southwest of the modern-day Mauritius airport. And of course in both the London and Tring galleries you will find two feathered dodo models. These types of ‘fake’ dodos were popularly produced by taxidermists such as Rowland Ward using feathers and tissues from other birds.

The British Trust for Ornithology estimates the UK population of common or feral pigeons (wild rock doves) could be as many as 18 million. At the Museum in Tring we have a mounted specimen of a rock dove, Columba livia, as well as the two other species of UK wild pigeon, the stock dove, Columba oenas, and the woodpigeon, Columba palumbus. But these birds aren’t just sitting pretty; it could actually be said that they played a part in enabling the creation of the Museum itself.

From the early-to-mid-1800s the Rothschild family began exploiting birds for communication, setting up a network of carrier pigeon lofts around Europe to carry information between its financial houses. In the Rothschild archive today survive several pigeon post messages. One written by Nathaniel de Rothschild in August 1846 from Paris says, “I hope our feathered messengers will have brought you in due time our good prices”. The same letter reveals, “A B in our pigeon dispatches means: buy stock, the news is good; C D means sell stock, the news is bad”. The speed with which pigeons could deliver the family’s messages, far quicker than any other means at the time, was a key tool in the Rothschild business strategy and is credited with helping the family amass its fortune.

And it was some of that wealth (and much more accumulated besides) which eventually reached our own Lionel Walter Rothschild, who, on his twenty-first birthday in 1889, was gifted the land to house his natural history collection and menagerie. After his death in 1937, this was bequeathed to the nation, becoming the Natural History Museum at Tring.