Through the largest of Bethlem Hospital’s remaining apple orchards, over badger sets, and past a light pole on which kestrels are often seen perching, can be found a wood pile.

This repository for the gardeners’ waste is what Sue Burbidge, craftswoman and Bethlem Gallery volunteer, calls her “office”; a rudimentary two-legged, one-top-plank construction nearby, her “desk”.

Alongside the desk is a pile of willow branches covered by a tarpaulin, under which a vole can regularly be found nibbling off the bark (“He’s doing my job for me,” she says). A metre or so further away is what looks like the remnants of a campfire. “That’s where I make artist charcoal,” Burbidge explains. “It comes out beautifully, I didn’t realise how straightforward it was.” 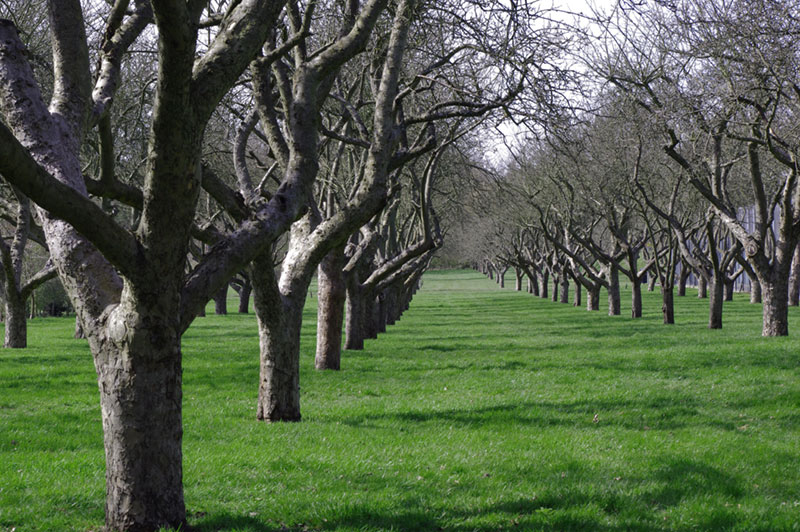 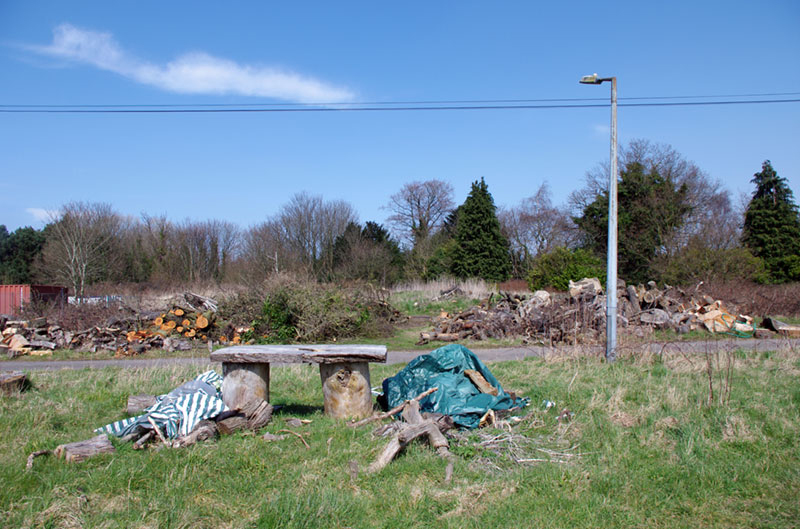 As the scene suggests, Burbidge’s work is inspired and informed by the environment around her, and largely made from the materials she finds there. Like using fruit to make dyes, sawdust and clay soil to make paper, and turning lopped tree branches into beautiful little bowls.

She says, only half-joking, that when she hears a chainsaw in the distance, she comes running.

It’s this all-encompassing approach which typifies Bethlem Museum’s item number LDBTH 979: an intriguing cabinet made by Burbidge from old honour boards and skirting salvaged during building renovations, and completed with natural materials, and items crafted therefrom, found on the hospital’s 270 acre site.

“This was quite an unusual project for me, I don’t usually get things that are kind of already made and then asked to remake them. I’m usually starting with raw materials.”

The Bethlem cabinet is both those things. As it is both a record of the past and the present, of patients and staff, of the site’s animals and plants; as it is both outward- and inward-facing, obvious and obscure. 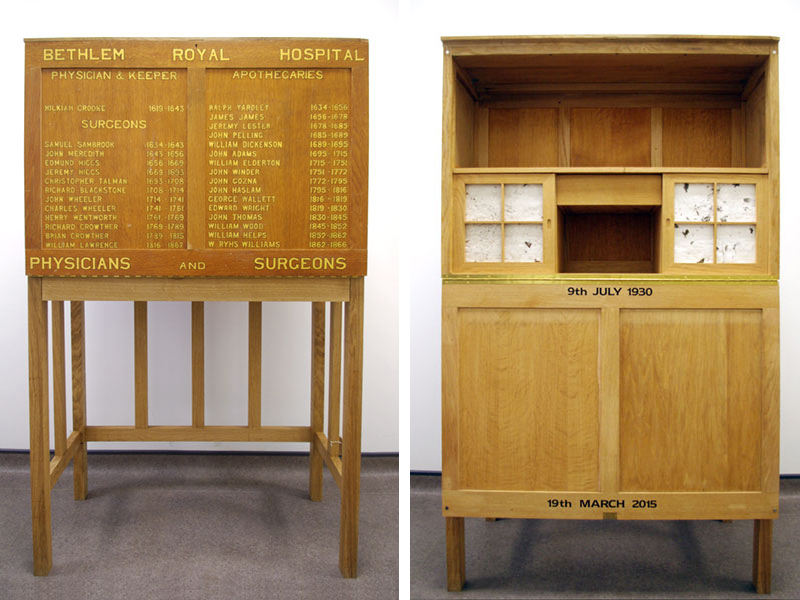 “There’s always this thing with furniture, that people are geared to look at it from a certain angle, from the front. I wanted to play with that idea. I wanted to maintain the visible names of people on it, but also include some other things that were either semi-visible, or only visible if you look hard for them,” she explains.

So the exterior of the cabinet is made from the honour boards, which list some of the surgeons, physicians and apothecaries who have worked at the hospital — which specialises in the care of the mentally ill — since the 1600s. Pull down the hinged front panel, and behind screens of handmade paper speckled with leaves, are transparent photographs of the property (formerly a country estate known as Monk’s Orchard) taken during the hospital’s construction. Also displayed are lists of the varieties of apples and plums still growing on the site today, as well as the resident birds on the red and amber lists of threatened species. In a drawer are nine delicate tea bowls, each made from a type of tree grown within the hospital’s grounds. 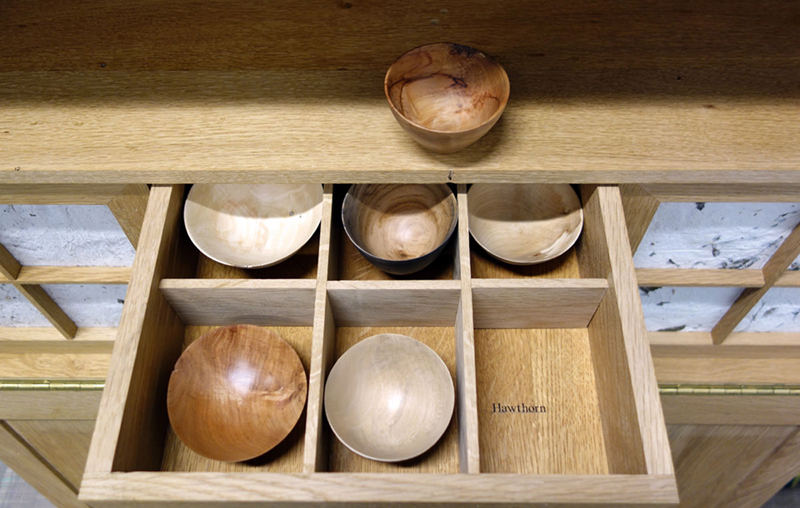 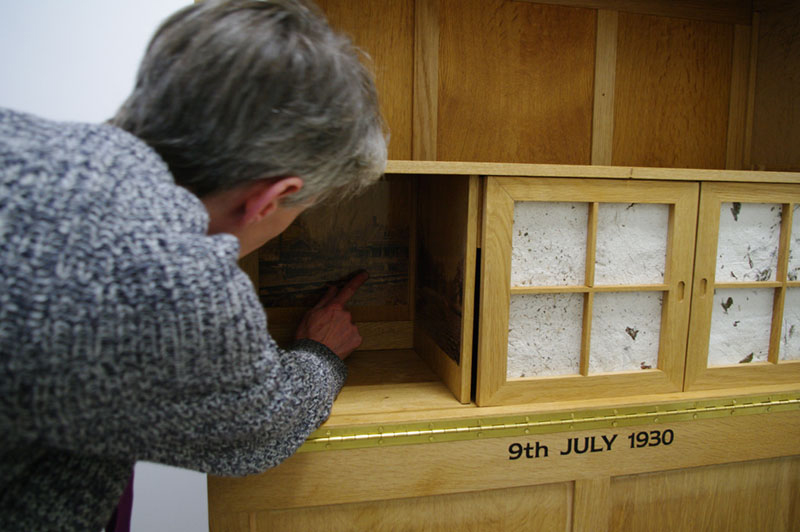 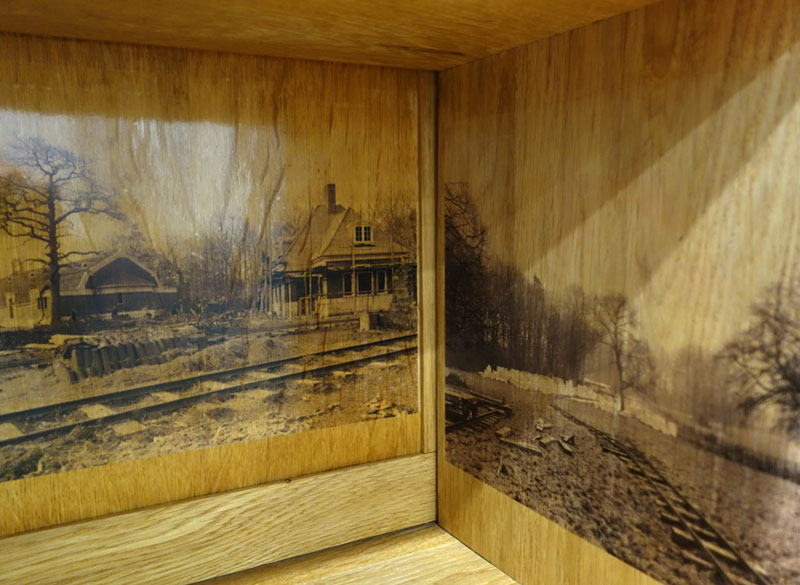 On the back of the cabinet, a small wooden handle on the frame of a board honouring house governors who served from 1948-85, reveals an honour of a different kind. On the inside of this small hinged door is an accolade given to Bethlem’s gardeners in 1954: the H J King Sweet Pea Trophy, for a winning entry at the Beckenham Horticultural Society Show. Look deeper inside the opening this door protects, and you see something else.

“From the front, when you look into the cabinet, you think that the back that you’re looking at is the back of the cabinet, but it’s not, it’s a false back,” Burbidge explains. “I made this bit at the back with a resonance of a kind of prison, or a padded cell, the way you can just open the door and peak in…

“Inside are two lists of patients. The choice of names was fairly random, except that I tried to pick dates that matched with the dates on the honour boards. It’s just fascinating: ‘cause of insanity: cannot say’,” she says, pointing out one entry in the list. “Sometimes the reason was grief. Sometimes it’s work exhaustion. But it seemed to be more of a description of a life circumstance, rather than a clinical diagnosis.”

Of course, it’s just a tiny fraction of those admitted in the life of the hospital, which was founded in 1247.

“The history of this place is fascinating. There are so many layers to the hospital. But it’s only been on this site since 1930. Before that there are more layers here, of everything that went on when this was a country estate.”

“The more I’m here, the more strongly I feel about wanting to tell the stories of the trees. The history that’s gone on around the tree has directly influenced the way it’s grown…”

To that end, Burbidge’s next project is to fill the top shelf at the front of the cabinet with xylotheques, ‘books’ made entirely from wood, traditionally as a form of identification of the species of tree from which they’re constructed. The first entry into this mini wood library will be the ‘Queen Mary Oak’. Although, it almost wasn’t to be.

“When I first came down to the wood pile, and started picking bits up, I was talking to Mark (West, Bethlem’s head gardener) about a particular piece of wood, and he said ‘Oh, you mean the Queen Mary oak?’ and I said ‘What do you mean by that?’ and he said ‘That’s the tree that Queen Mary planted’. It was just on the wood pile. If I hadn’t come down and rescued some of it, Queen Mary’s oak would just be rotting away,” she says, still clearly astonished by the possibility.

“It usually takes a full year to collect everything to go in a xylotheque, to cover all the seasons. In my Queen Mary oak one I’ve put a photograph of Queen Mary planting the tree, and there are samples of dyes I made from the bark, there’s paper made from remnants from this particular tree, there’s a slice, a cut through, of branch wood. I’ve made a little bowl from one of the oak’s branches, there’s an acorn in there, some of the lichen that was growing on it, some moss. And a bit of bark goes on the spine.

“What’s interesting is that, historically, xylotheques are quite rough and ready. I know very well from furniture from around 250 years ago, when this tradition seems to have started, that they knew much more sophisticated techniques for making things, but they seemed to have not been bothered by that.” 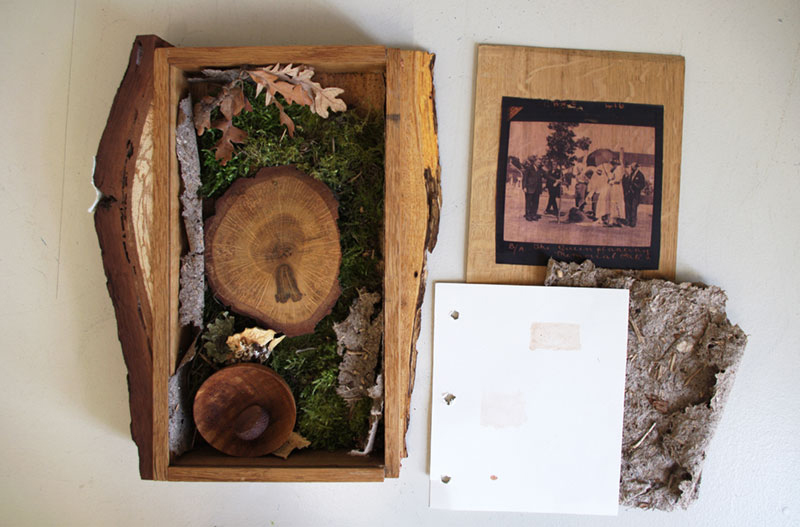 It’s the kind of approach that Burbidge takes herself.

“I’m self-taught. It all started probably about 10 years ago, quite practically: if you haven’t got much money, and you want some bookshelves, it’s cheaper to make them than buy them. I just took it from there. I realised that wood was what I wanted to work with, so I taught myself to do cabinet making. Not brilliantly sometimes, but I’m not really driven by the technique of it. As long as it’s functional, that’s fine with me.”

She’s recently completed another cabinet, this one made from an old, fallen sweet chestnut, which features prominent blue streaking, caused by the wood’s reaction to barbed wire wrapped around the trunk when it was young, and eventually enveloped into the wood. A colleague who lives at Down House, Charles Darwin’s residence, has also given her a beech tree that recently came down on the property. It used to stand next to Darwin’s ‘thinking path’, a stone and sand trail that formed the basis of his daily walks.

“I couldn’t say no,” she smiles. “It’s beautiful, beautiful wood. It’s got all these black lines in it, which is called spalting. It’s like a fungus, which is probably why the tree came down.”

Burbidge doesn’t have any firm plans for it yet, she’s just letting is “season” for now.

“Sometimes I want to work bigger and more sculpturally, and other times I really love making the little bowls. They’re based on the idea of the Japanese tea bowl, and wabi sabi, the term for valuing imperfections. With their tea bowls, often the worst side, the roughest side, is the one put to the front so people can see it.

“I like that, because they’re the bits of wood I like, the ones with the imperfections. And it’s just a good philosophy to bear in mind as well.”