A flash of insight might feel like a spontaneous, instantaneous revelation, but experts say they can see signs that something is brewing several seconds in advance. 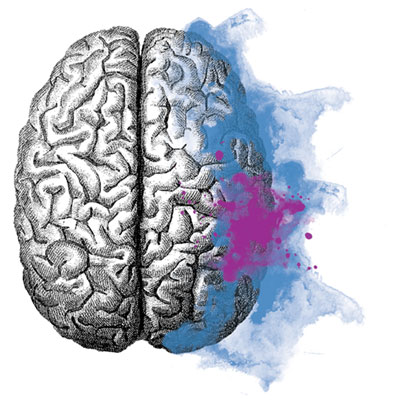 Neuroscientists John Kounios and Mark Beeman used electroencephalography (EEG) and functional magnetic resonance imaging (fMRI) to pinpoint the series of processes that take place in our brains before and during a flashbulb moment.

It all starts with a problem. There has to be a mental block before a breakthrough can occur. But focusing complete concentration on the problem is not the solution. Instead, the mind must be allowed to wander, to relax.

The precursor to insight is alpha waves emanating from the brain’s right hemisphere. Alpha waves are known to show up when we’re falling asleep, and are a sign that certain areas of the brain are shutting down.

In the case of insight, the alpha waves shut down the visual cortex, momentarily blocking out visual stimuli — like a blink — allowing a faint idea to bubble up to the surface of the unconscious mind.

Next comes a burst of gamma waves from the anterior temporal lobe, just above the right ear. This is a sign that neurons are binding, or working together, to formulate a new solution to an old problem.

This gamma burst propels the idea into the conscious mind, and the Aha! moment occurs.