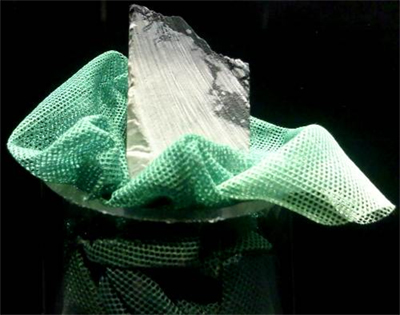 A mineral with the same composition as Superman’s only natural weakness is on display in the Earth’s Treasury gallery at the London museum.

Jadarite, discovered in Serbia in 2006, is composed of sodium, lithium, boron silicate and hydroxide.

When NHM mineral expert Dr Chris Stanley found the specimen’s make-up didn’t match anything else known to science, he turned to the internet and typed in the combination of chemical elements.

“I was amazed to discover that same (list of elements) written on a case of rock containing kryptonite stolen by Lex Luthor from a museum in the film ‘Superman Returns’,” he says.

The only difference between Jadarite and Kryptonite is fluorine, which gives Kryptonite its green colour.

And, of course, Jadarite is not radioactive; although as yet its effects on superheroes from the planet Krypton have not been tested.